« For this extraordinary stationary voyage, Katerini Antonakaki ineffably cultivates time in almost the same way as a child might. Let’s say she tames time. The time that settles on the objects we need to remind us of ourselves, but which can also be capricious, unrecognizable and bizarre just like our shadows, may be touched and experienced! »

With the support of the Dunois theater in Paris, the Safran in Amiens, the Tas de Sable – Pôle des arts de la marionette en région Picardie, the Centre Culturel Jacques Tati in Amiens, the Maison de l’Architecture de Picardie and the Ramdam arts centre in Lyon. 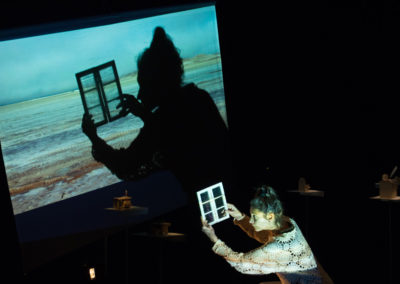 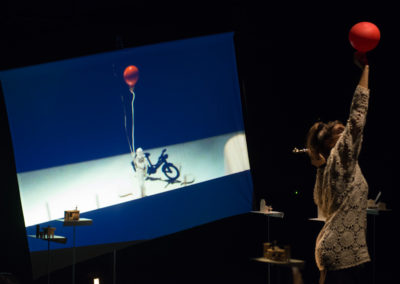 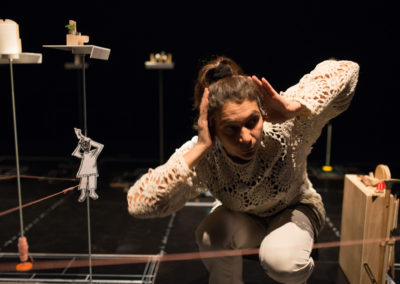 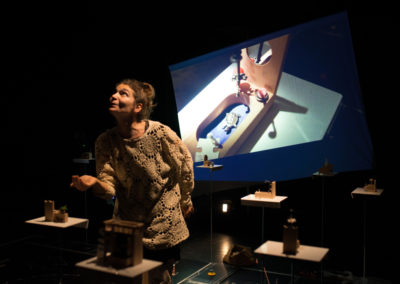 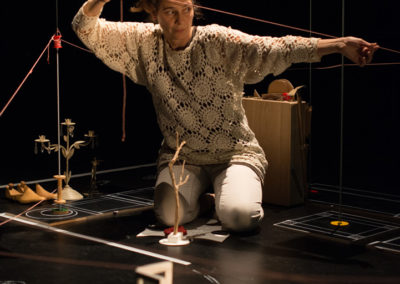 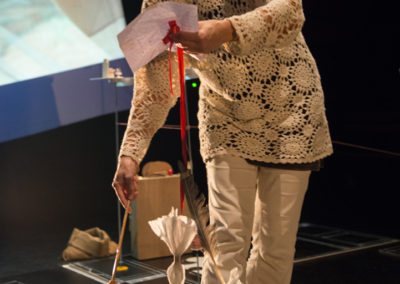 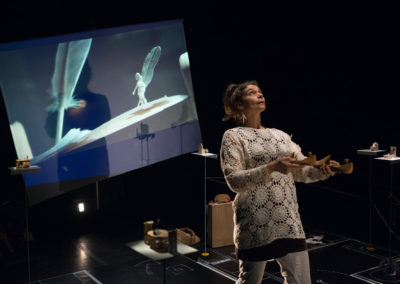 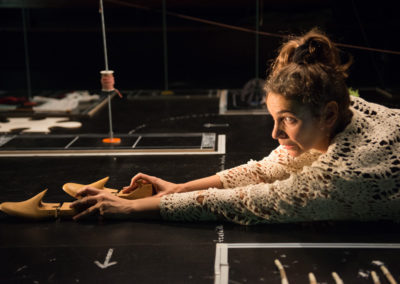 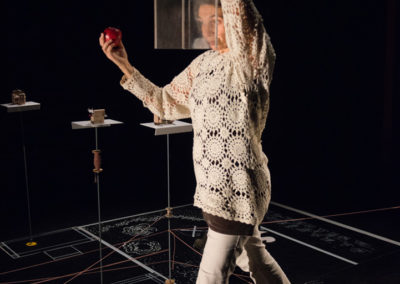 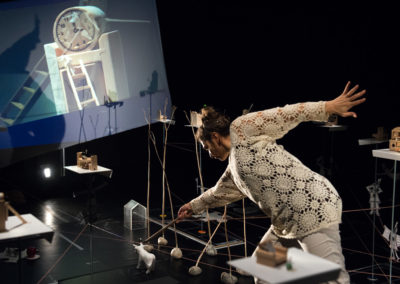 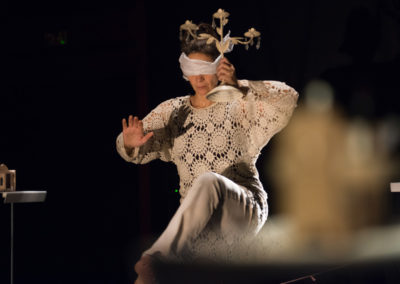 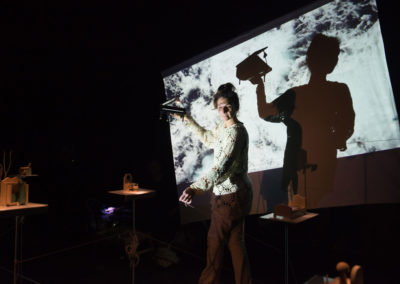 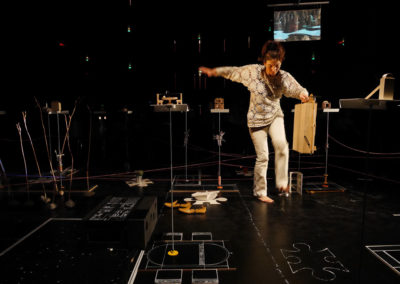 From the moment the spectator enters the Dunois Theater, plunged into semi-darkness, he finds himself within the strange universe of an exhibition of objects placed on pedestals. Houses, living rooms, and dining rooms… we find ourselves in Penelope’s world, waiting for Ulysses. Little by little we make our way onto the stage, littered with pedestals, where once again we move from discovery to discovery through a kind of mysterious labyrinth. Chairs placed on the stage enable the spectator to find himself at the heart of the actress’ promenade as completely by chance, on the throw of a dice, she moves from place to place weaving a web of thread between the sculptures. This game takes place no only on the stage but also on a large screen, which acts as a mirror to her wanderings. This initiatory route is punctuated by music, creating the impression of a dream world.

A mythical figure from the Odyssey, Penelope cries out for appeasement. Her voyage without movement already shows on her face, for example on a Greek vase showing her weaving a veil. It’s only an image of course, apparently immobile, but thoughtful minds are perfectly aware that immobility is an illusion created by our perception and that time amuses itself with living beings, as despite all the clocks and other measuring devices in the world, it remains quite subjective.
How much do the twenty years Penelope spent waiting for her husband really weigh when compared to the length of a marathon race, or the explosion of a champagne cork or the interminable wait in a queue of some kind?
Imagine a half-open door letting through a ray of sunshine. You don’t need to do anything except let yourself be guided by this ray of light incarnated by Katerini Antonakaki, who leads spectators through an audacious and fantastic treasure hunt, discovering the numerous rooms of Penelope’s home.
Earlier the spectators were able to discover miniature models of the pieces of furniture making up the interior of the house, whose layout is traced out on the floor.
Equipped with a small suitcase, Katerini / Penelope throws the dice that will decide the order of her visit. Each room has a corresponding jigsaw piece making up a map of this imaginary landscape. Each of the small objects found on Penelope’s path is far from being a symbol of idleness, they are a nod towards something, they perspire, they cry out in the silence, they blush at their very existence in the incongruity of a strangers gaze, that of the spectator.
Katerini Antonakaki walks barefoot as if she were aware that the silence and apparent immobility of the objects might be upset by the arrival of a human and that it is necessary to move quietly around them.
The sound and lighting effects created by Sébastien Dault are in perfect symbiosis with Penelope and her static voyage, which in fact is revealed to be extremely active: she not only dances and completes feats of balance but also performs extracts from Homer’s Odyssey, Ovid’s letter from Penelope to Ulysses and “Les Plaisirs de la Porte” by Francis Ponge.
For this extraordinary stationary voyage, Katerini Antonakaki ineffably cultivates time in almost the same way as a child might. Let’s say she tames time. The time that settles on the objects we need to remind us of ourselves, but which can also be capricious, unrecognizable and bizarre just like our shadows, may be touched and experienced!

With an astonishing installation the “main d’oeuvres” company teaches us about the movement at the heart of immobility. Penelope leads us into a small theatre, exploring the relationship woven between everyday objects and ourselves. From an installation into a performance…

… Then the tiny figure present among the models becomes real within a house without walls, traced out on the floor like a geographic map inhabited by memories. Penelope leading us into a theater, where everything takes place on grander scale! Fascinating!

Penelope could spend her life just like the rest of us, sitting on a chair, lying on her bed, not expecting anything in particular, if she wasn’t called Penelope… That’s exactly it! She’s the one who doesn’t move, the faithful one, who is also capable of wandering around the imaginary map of her inner space. It’s just crazy how things move! With this Penelope, each piece of furniture, each object becomes an island of adventures.

This is a book made of drawings, texts and pictures from the installation dans la nuit du meuble and the performance le voyage immobile de Pénélope